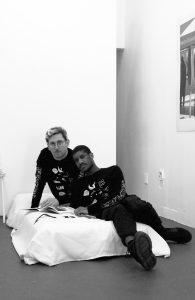 Elevator to Mezzanine is a cataloguing space formed by Steven Warwick & DeForrest Brown, Jr. in 2017. Working across several media platforms, their respective practices combine to propose a War on Style. In 2017 they produced a lookbook/ style journal with texts and essays exploring modern intimacy (or rather the lack thereof) both on and offline, which culminated in a performance installation at Issue Project Room and an exhibition at Cleopatras project space in New York. Warwick and Brown will discuss their respective approaches to narrative across media and how they merge in their collaborative project.