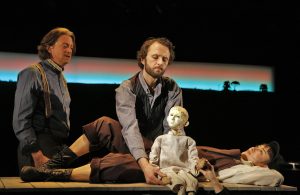 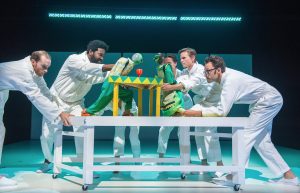 Josh Rice, award-winning and visionary puppeteer, invites you to a workshop to explore puppetry, the age-old art of animating the inanimate or giving life to an object that was once lifeless.  Rooted in ancient Japanese traditions, workshop participants will learn basic Bunraku-style and Kuruma Ningyo (cart puppet) style manipulation techniques through hands-on exploration of breath, eyeline, focus, and micromovement.  Participants will have the opportunity to make their own Bunraku-style puppets, and to explore how to tell stories with these objects, using non-verbal communication and gesture.   This workshop is great training for actors, dancers, and performers to explore subtlety, nuance, and how to make your performance secondary, and in service to the puppet/object, which is the primary focus of storytelling. 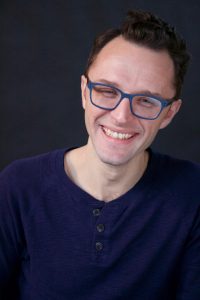 JOSH RICE is a multidisciplinary theatre artist specializing in puppetry.  Credits: Dan Hurlin’s Demolishing Everything with Amazing Speed (Bard SummerScape, Holland Festival); Shank’s Mare (La MaMa, Japan tour, Hawaii tour, U.S. tour); Petrushka with the NY Philharmonic Orchestra (The Barbican); The Scarlet Ibis (HERE); and his own work, The Marooned at Dixon Place; The VaudeVillains and Composite Portrait at La MaMa; The Tempest, directed at Shake on the Lake and Sarah Lawrence College.  Most recently, Josh relocated from NYC to his hometown when he was awarded a Wyoming Country Rural Arts Initiative Grant to start a theatre in an abandoned main street storefront in Perry, NY—Theatre@37—which will be the home of the inaugural New York State Puppet Festival, June 14-24, 2018.  He is the co-founder and Producing Artistic Director of Shake on the Lake, a not-for-profit, summer, touring theatre festival in Silver Lake, NY, that specializes in fast, physical, and accessible adaptations of Shakespeare’s plays, incorporating simple performer-driven spectacle, puppetry, live music, improvisation, and audience interaction.  He is a Teaching Artist with the New Victory Theater and Young Audiences of WNY, and Adjunct Theatre Faculty at Pace University.  He also founded and directs The Mnemonic Theatre Project, a puppetry program for seniors living with Alzheimer’s and Dementia, which has been featured on the PBS documentary series, Visionaries.