Wednesday, March 7, 5 pm in Todd Theatre Lobby FREE and open to all. 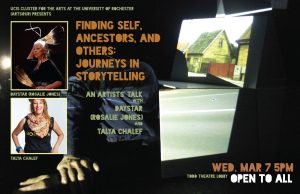 Native-American choreographer, Daystar/Rosalie Jones, and Theatre Program Artist-in-Residence, Talya Chalef, talk about their work devising new performative experiences and finding ways to tell stories through image, movement, text, curation, research, and imagination. A primer on storytelling as performance practice, Finding Self, Ancestors, and Others: Journeys in Storytelling introduces audiences to two acclaimed artists and their strategies in telling stories that are too infrequently heard. 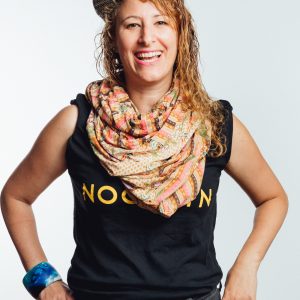 TALYA CHALEF is a Brooklyn based South African/Australian interdisciplinary artist who has developed and presented new projects since 2004. She is the co­founder of Public Works Department with Sofy Yuditskaya and a member of Mapping Spectral Traces – a global group of artists, scholars and academics concerned with cultural geography. Talya explores themes of social justice, memory, history and identity and seeks out new forms of performance. Projects include: Site (2006), In Other Words (2007 Melbourne & 2009 Argentina;­ both nominated in the Victorian Green Room Awards) and Eyton Road (2009 Melbourne & Cape Town). She directed An Improvised Explosive Device (2011) for the NY Fringe and wrote and directed L’Chaim (2013). Talya has participated in numerous artist residencies in both Melbourne and NYC including: ArtsHouse North, Melbourne Meat Market; Abbotsford Convent Melbourne; Watermill Centre, NY; Space on Ryder Farm; Mount Tremper Arts, Centre for Advanced Study University of Minnesota; and was an invited guest artist in Maynooth Dublin. Talya completed an MFA at Columbia University (2013) and holds a graduate diploma in Animateuring (Theatremaking/Devising) from the Victorian College of the Arts, Melbourne (2004). She is the recipient of multiple awards including the Columbia Dean’s Fellowship, the prestigious Elizabeth Murdoch Travel Fellowship, multiple Besen Family Foundation Awards, and most recently The Australian Council of the Arts 2014 ArtStart Grant. 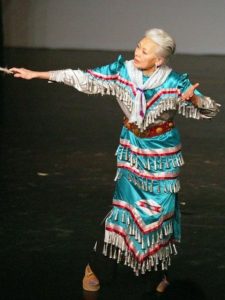 DAYSTAR (ROSALIE JONES) was born on the Blackfeet Reservation in Montana and is of Pembina Chippewa ancestry on her mother’s side. She holds a Master’s Degree in Dance from the University of Utah with postgraduate work at Juilliard School in New York City. She studied Korean, Hawaiian, East Indian and Flamenco dance, mime with Reid Gilbert, and modern with Jose Limon and Hanya Holm. Over many years, she has gained a knowledge of the indigenous dance and cultural forms of the Plains, the Northwest Coast, and Conchero Dance, among others. As a teacher, she was responsible for the revitalization of Performing Arts at the Institute of American Indian Arts in Santa Fe, NM, during the early 1990’s when she was Chair of the Department. In 1995, Daystar was awarded a two-year National Endowment for the Arts (NEA) Choreographer’s Fellowship.Daystar/Rosalie Jones is the Founder and Artistic Director of DAYSTAR Dance Company. The Company, founded in 1980, was the first dance company in the U.S. created with all-native performers and specializing in the portrayal of the personal and tribal stories of Indian America. The Company has toured throughout the United States and Canada, and in Germany, Bulgaria, and Turkey.